I step outside and the chilly air tightens the skin on my bare arms. Summer has ended all too quickly, and some of the leaves on the trees have already started to burn with the colors of fall. Fall colors…. so bright and intense and beautiful. It’s like nature is trying to fill you up with color, to saturate you so you can stockpile it before winter turns everything muted and dreary.

After the first autumn rains, how inimitable the beauty of days—the fall colors, not yet faded, washed out, in the winter deluge, but dripping, glistening, every crystal drop refracting the hue it trickles over. Running, draining color, brighter before the soil takes back again the positive red and yellow and blue to weave into the misty textures of spring.

—Virginia Garland, “The Rain,” Out West: A Magazine of the Old Pacific and the New, February 1908

The most basic attainment during Zen meditation is an experience of what is sometimes called “no-thought.” Perhaps “mindlessness” is closer to English usage. This gives you some idea of the experience of the silent clarity of mind during the depths of Zen meditation.

When you see an autumn pool with red maple leaves in it, it may seem as though the water is stained red. But if you scoop up the water, you will see that the water is as pure as it ever was. The red or pink of all those colored leaves cannot tint the water, which always remains unstained. Our mind must be the same as that autumn pool with all that stuff in it. It must be kept unstained. This is the natural condition of the mind. If you see a donkey, you think of it, but when the donkey goes away, you think nothing. The mind is awake and perfectly at rest within its own clarity, but there is no object to be thought about. This is no-thought, mindlessness. In Buddhist terms, it is sometimes called “emptiness,” or “empty mind,” but the mind, though empty of thought-objects, is fully awake within itself. Perhaps a better term is “awakened clear spaciousness,” “lively restful silence.” It is an experience of mental spaciousness without any edges, and of perfect clarity and silence of mind without any extraneous objects or sounds occupying any space in the mind. This is the original pure nature of our mind. 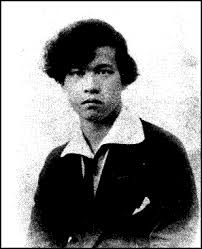 (My bloggy note): This is one of several passages by Sokei-an Roshi in which he mentions water remaining colorless though appearing tinted by red and gold leaves of autumn fallen in a pond, using this as an analogy, a metaphor, for the inherent nature of mind remaining clear and pure, whether thoughts are present or not. He often located the analogy with an insight-experience he had as a young man while traveling in the mountains of the American West at the beginning of the twentieth century. (See & compare his passage in my earlier blog post.)

Sokei-an, like most of the earliest Zen masters to spend time in America, was a very colorful character. He had studied art in his youth and spent years as a wandering wood sculptor in Japan before coming to California. As a wandering vagabond and occasional farm & ranch worker, he walked throughout the Pacific and Inter-mountain West before settling in Greenwich Village. Only some years after being a central, but quiet, figure (a modern dancer as well as a sculptor and poet) in the Bohemian artist and writer community of the Village did he complete his Zen studies, and begin his career as a recognized roshi or teacher of Zen.